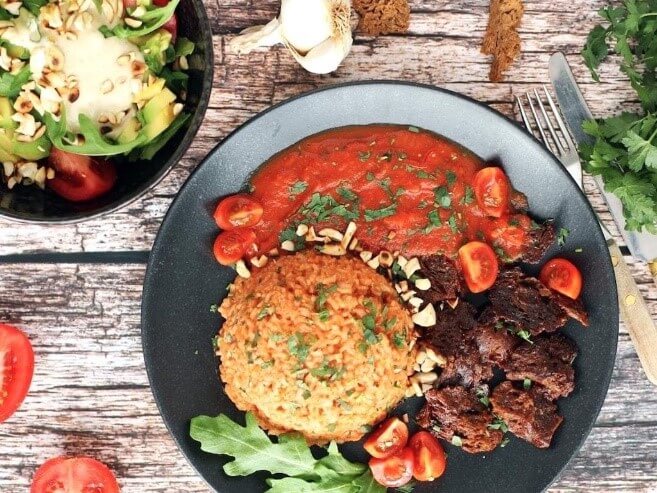 Africa Rising: Vegan and Alt-Protein Scene Heats Up Across Continent

Alternative protein innovation is heating up all over the world—and Africa is no exception to the trend. While American food techs like Beyond Meat and Impossible Foods may have the spotlight right now, a rising cohort of start-ups across the African continent are making vegan meat tailored to Nigerian cuisine, cultured seafood in South Africa and so much more. Beyond entrepreneurs, the ecosystem is being supported by African VCs and non-profits too.

Start-ups are popping up across Africa with no shortage of novel alt-protein innovations. In the vegan protein scene, VeggieVictory pioneered the concept in Nigeria, becoming the country’s first-ever plant-based meat brand.

Based in Lagos, the company’s range includes plant-based meals tailored to Nigerian cuisine, such as efo riro stews made with its ‘Vchunks’ vegan meat, as well as international fare like meatless soy-based burger patties, shawarmas and hot dogs. The company is now gearing up to launch vegan beef jerky.  In 2020, the brand was acquired by The LiveKindly Collective.

African start-ups are also now leveraging other technologies, from cell-cultured to fermentation.  The first cell-based meat player landed last year in South Africa - Mzansi Meat, headquartered in Cape Town, is working on slaughter-free minced beef, burgers, and nuggets, but also cuts of meats that locals consume. Burgers and nuggets feature heavily in Western cuisine, but not as much in African dishes.

Also based in South Africa is Sea-Stematic, the continent’s very first and only cell-cultured seafood firm. The woman-led company, founded by Marica Quarsingh wants to deliver a whole range of seafood products that have been cultivated directly from cells to diners across the world.

De Novo Dairy, is a start-up that’s pivoting away from insect protein and tapping precision fermentation. The young company is using the same tech as Perfect Day to ferment and grow real dairy proteins without the cow, and turn them into bioidentical, cruelty-free and lactose-free cheeses, yogurts and ice cream.

All these start-ups are being supported by a budding alt-protein African ecosystem, from domestic investors to non-profits.

The Vegan Africa Fund, is a VC dedicated to helping scale plant-based ventures across the continent. Headquartered in Mombasa, Kenya, the firm wants to close the gap in access to capital that African entrepreneurs face, backing companies that are innovating novel made-in-Africa alt-proteins and helping build an industry that could become a net-exporter powerhouse for the world.

The growth of the African plant-based industry is also aided by businesses like Infinite Foods, which is bringing more plant-based products into Sub-Saharan Africa. The platform, based in Johannesburg, South Africa, is providing an end-to-end service for international vegan brands to enter the African market.

In addition to working with more than 800 foodservice outlets across the continent, including in Mauritius and Botswana, Infinite Foods also offers e-commerce to bring brands like Beyond Meat and Oatly directly to consumers’ doors.

Africa Rising: Vegan and Alt-Protein Scene Heats Up Across Continent