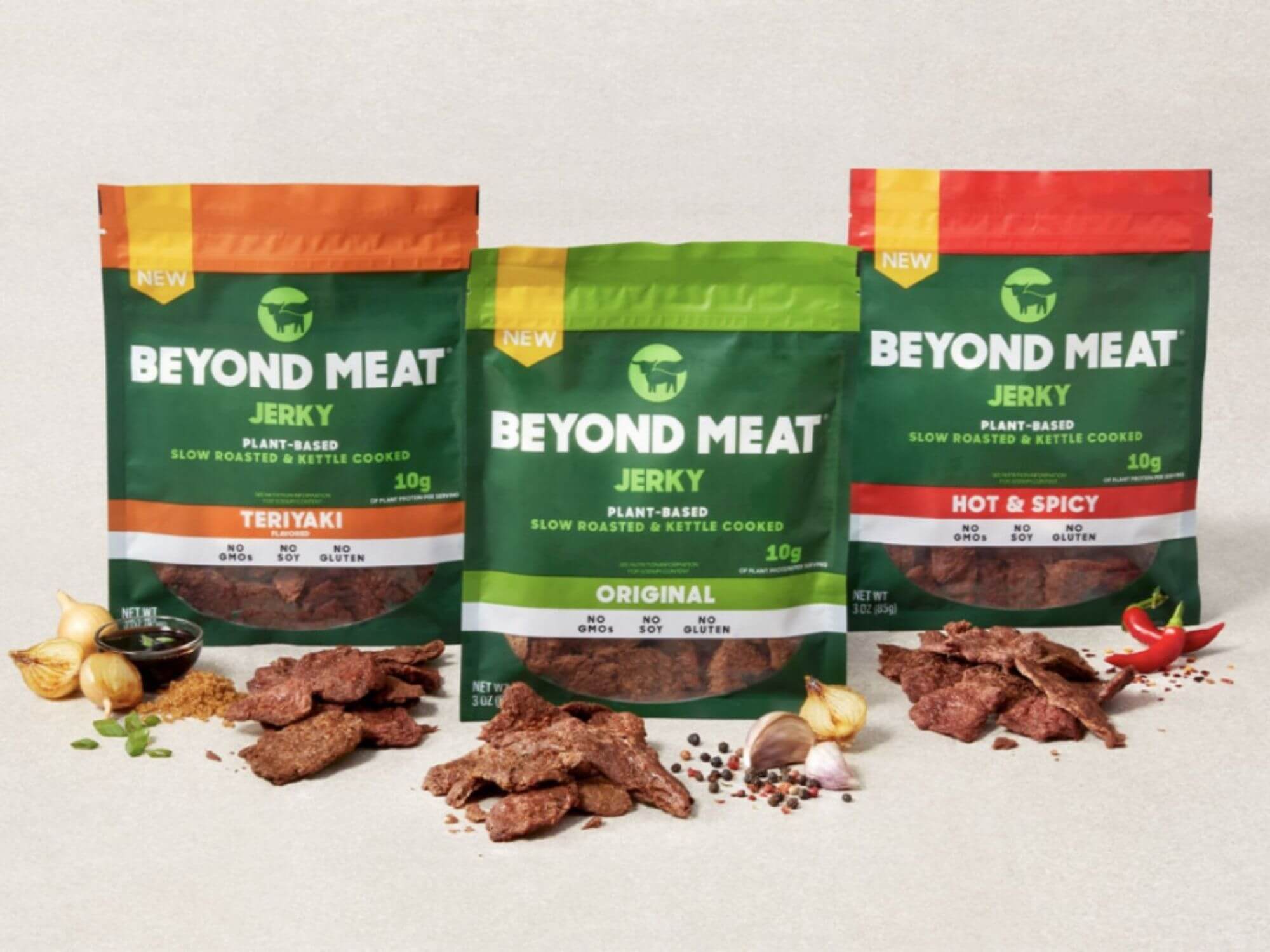 2021 saw beyond Meat and PepsiCo announce a new collaboration. Planet Partnership, as the joint venture was dubbed, was founded to develop snacks and beverages using plant protein. The duo has now unveiled its first commercial product launch in the form of a vegan jerky line.

Beyond Meat Jerky, made from plant proteins including peas and mung beans, comes three flavour profiles and is launching in stores across the U.S. this month. The move represents Beyond’s first foray into shelf-stable products. Traditionally it has focused on refrigerated items including its world famous vegan burgers, as well as sausages, ground beef and most recently chicken tenders.

Tapping into the snack market

PepsiCo is no stranger to the convenience food sector- the drinks giant owns multiple snack brands already such as household names Funyuns, Doritos and Lays. Beyond, however, has not sought to enter the market, until now. Consistently compared to closest plant-based rival Impossible Foods, its foray into ambient products is a welcome diversification.

Available in different sized packs, the jerky line is non-GMO, plus soy and gluten-free. Its shelf-stable USP means the Beyond brand can now be stocked at stores it was formerly not appropriate for. It can now branch out from grocery supermarkets and find a place within service stations and smaller stores, across far wider distribution.

“We are thrilled to introduce the first product from Planet Partnership, our joint venture with Beyond Meat and PepsiCo,” Dan Moisan, CEO of Planet Partnership, said in a statement. “The nationwide launch of Beyond Meat Jerky will make plant-based meat accessible to millions of households. It tastes great, it’s a good source of protein, and it’s convenient to eat whether you’re on the go, at the office or out on adventures.”

The jerky claims to offer 10g of protein per serving, zero cholesterol and the full experience of dried meat snacks.

The beginning of something better for Beyond?

Planet Partnership was launched to leverage the plant protein technology of Beyond and PepsiCo’s ability to scale and distribute. The two are looking to co-develop a range of products from a Californian base of operations. The timing is positive for Beyond, which has recently divulged sub-par performance results and a stock dip.

Despite what Ethan Brown, CEO at Beyond, cites as Covid-related operational challenges, the company is pushing ahead with strategic partnerships. Last month, it confirmed two new dishes for Panda Express. In January, the announcement was made that its meaty crumbles are joining the Pizza Hut Canada menu permanently.

The rise of vegan jerky

Grab-and-go protein snacks such as jerky used to be a fantasy for plant-based eaters but numerous brands have stepped up. Hawaii’s Moku, Pan in Oregon and Maryland’s Eat The Change all developed mushroom jerky to tap into the trend. Plant-based powerhouse Gardein unveiled three jerky options in 2020, alongside its veganised soups and Canada’s Noble, once a meat brand, turned fully plant-based in 2018, seemingly leading the charge. It revealed a 70 percent increase in revenue during the Covid-19 outbreak, demonstrating consumers’ desire for food they consider healthful. The brand expanded into China in December last year. Meat-loving New Zealand has sought to get in on the action, with Off PIste, a domestic startup that secured NZ$1.5 million in pre-seed funding in 48 hours.

Even furry companions are being catered for with vegan jerky. Clif Bar, known for its energy snacks, announced it was moving into healthy pet snacks in December last year. The new Clif Pet jerky was developed to cater to active consumers that take their dogs out hiking with them. All products are 100 percent plant-based and designed to aid effective digestion.