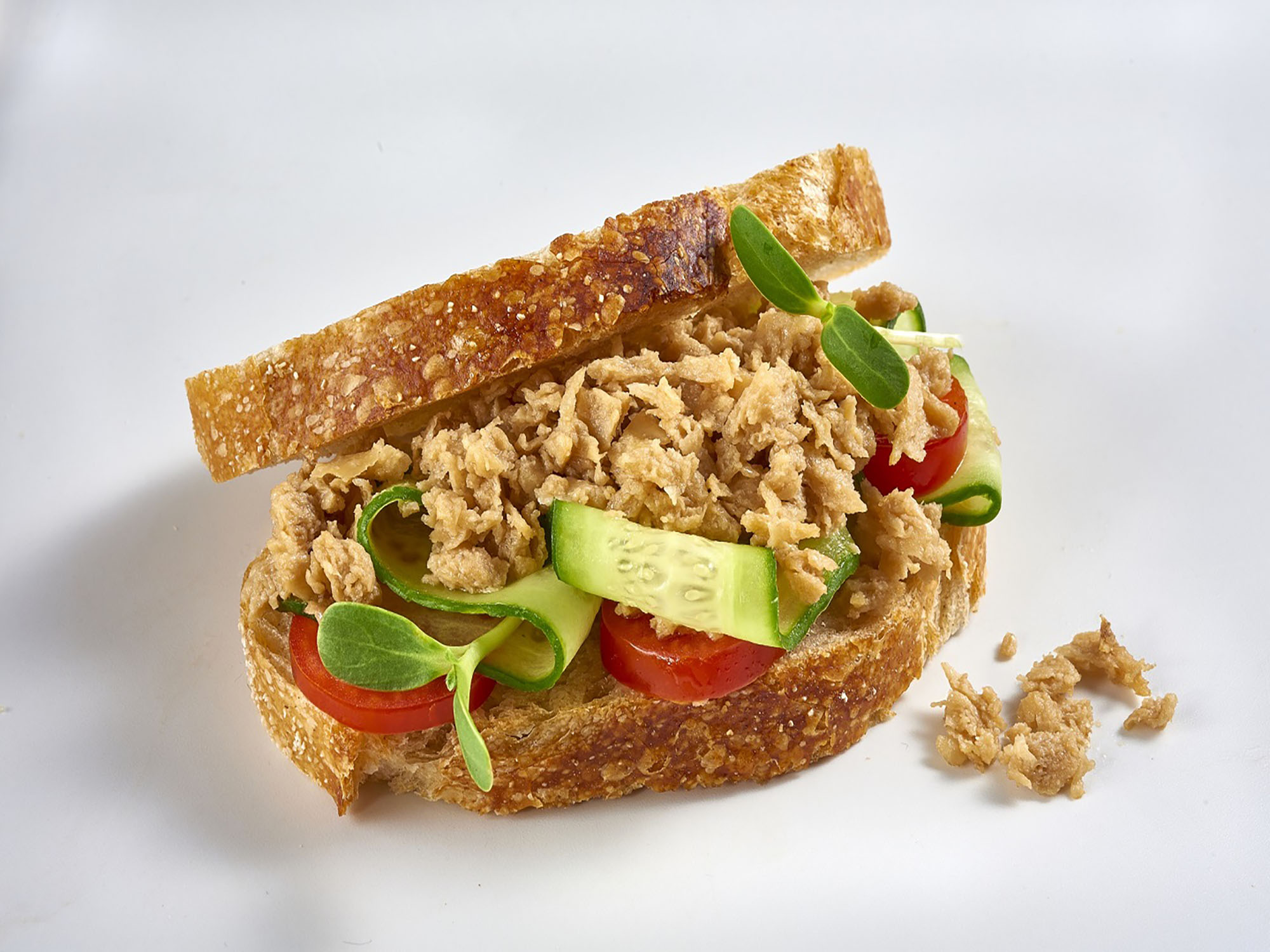 The food-tech developer and manufacturer of plant-based alternatives, Vgarden, has launched what it suggests is a game-changing vegan tinned tuna. The 100% plant-derived product has the same appearance, texture, and flavor of the canned kitchen staple. The tuna analogue is crafted to satisfy the appetites of the growing pool of sustainability-driven consumers by bringing to the table its creative response to the issue of the overfished and rapidly declining ocean populations of wild tuna.

“Tinned tuna has a very distinct flaky, yet moist and chewy texture, with a powerful fresh-from-the sea aroma,” explained Ilan Adut, CEO of Vgarden. “Our new tuna-like product is clean-label, scalable, affordable, and sustainable. But for our plant-based creation to serve as a true substitute, even beyond compellingly mimicking all of the sensory qualities, it also has to match tuna as much as possible in nutritional value.”

Following 12 months of experimentation with ingredients and processes, the start-up developed its winning plant-based tuna formula. The private-label product is already being rolled out in the retail and food service sectors. It is available in two packaging formats: pouches for chilled storage and actual tins to give the full authentic tuna experience and to facilitate non-chilled storage Vgarden’s R&D mission was to develop a tuna that can be canned and sterilized at high temperatures, yet still retain its full flavor and texture. The company has filed a patent for the formula and process.

Vgarden’s tuna analogue is based on pea protein, with a total protein content of 11.2-14%, before and after filtration. It contains a short list of natural ingredients including fibers and sunflower oil. Being sourced outside the marine ecosystem, the start-up’s 'tuna-free' tuna contains none of the toxic metals, microplastics, and other ocean pollutants. Its proprietary manufacturing process uses only minimal energy consumption and water, lifting the burden on marine life, bringing a highly sustainable and guilt-free seafood option to consumers.

“Aquaculture and the overfishing of this high-in-demand fish has had a devastating effect on their numbers to the point that it has put several species, such as the yellowfin and the Atlantic Bluefin, on the edge of extinction,” noted Tom Rothman, Head of Global Sales at Vgarden. “This not only poses problems in terms of food security but also negatively impacts the delicate and fragile balance of the marine environment. Our plant-based tuna solution can help turn the tide on this ecocatastrophe and contribute to the restoration of the ocean’s wild tuna populations.”

Tuna is the world’s most consumed fish, according to a UN report. The global tuna fish market is projected to grow from US$41.06 billion in 2022 to US$49.7 billion in 2029. Canned tuna is a popular source of affordable protein that is convenient to store and requires no refrigeration. Europe and Asia are the leading buyers of canned tuna, with South America and the Middle East fast developing an appetite. Tuna’s popularity coincides with a major rise in ethically and ecologically motivated health-conscious consumers seeking plant-based seafood alternatives.

Vgarden was founded by Kibbutz Gan Shmuel and the Eliav family and has been making headway on the plant-based curve. The company already has launched a variety of meat and dairy alternatives in Israel under its MashuMashu brand. The vegan line is fast becoming a household name among the dairy-intolerant and flourishing flexitarian community. The portfolio also is currently offered in several popular restaurant and pizza chains in Israel, a country with more vegans and vegetarians per capita than any other Western nation.

Vgarden’s collection of faux firm cheeses also are tracking well in Australia, Canada, Asia and Europe, including generating interest among food manufacturers and foodservice operations in Germany and Austria. Recently, Vgarden entered into a joint venture with Cale and Daughters, Sydney, to establish a new dairy and meat alternative production facility in Australia. The plant is, already operational and is expected to reach full capacity by the end of 2023.