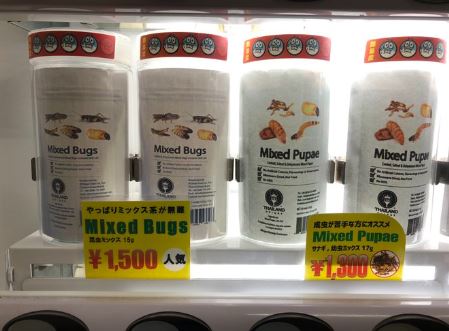 In Japan, you can get your supply of edible insects from vending machines

Vending machines selling edible insects have been set up at a camping facility in Nagano Prefecture, central Japan.

Insects have been drawing attention as an alternative source of protein to solve the global food shortage.

So young entrepreneur Osawa Asami set up a vending machine offering a whole range of bug-based snacks in the town of Takamori in Nagano Prefecture in central Japan.

“I hope people will feel open to trying it and take it home with them as souvenirs,” she said.

The menu consists of 18 types of deep-fried insects, including crickets and grasshoppers. Some are sprinkled with salt, and some are chocolate flavoured. Prices range from 1,000 to 2,600 yen, or between €6 and €19.

Last month, Osawa set up another vending machine with edible insects in the village of Achi. She says it was so popular, some of the insects even sold out.

Nagano Prefecture has a culture of eating insects, the entrepreneur explains, so she hopes the edible insects will gain popularity through the vending machines.

Insects are definitely on the menu in the future

Edible insects are rich in protein yet can be raised much more sustainably than beef or pork. Around the world, 2 billion people in 130 countries regularly eat insects.

United Nations food experts have been pushing insects as a good source of nutrition for years. They say that their consumption could reduce greenhouse gas emissions from livestock.

The UN Food and Agriculture Organisation (UN FAO) predicts that by 2050, food production will have to grow by 70 per cent to meet the rising demands of growing global populations and increasing wealth.

Now the global edible insect market is poised to boom, according to investment bank Barclays. Citing data from Meticulous Research, it forecasts the industry will grow to €6.7 billion by 2030 from less than €850 million in 2019.

In Japan, you can get your supply of edible insects from vending machines