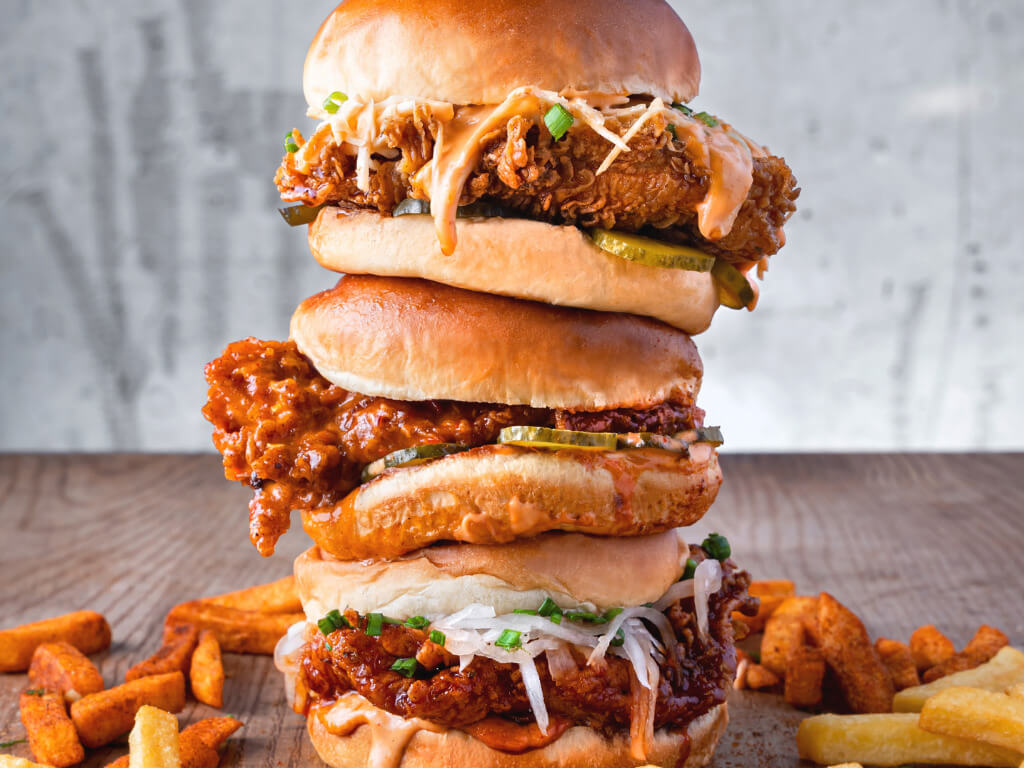 In the Race to Fix Our Food System, Vegan Chicken Is Poised for Victory

Chicken is now a top priority for vegan meat producers. And it all started in the most unlikely, but most fitting, of places: KFC.

In 2019, fast-food chicken giant KFC surprised Atlanta residents with a vegan shop pop-up. Its traditional red and white-colored restaurant scheme made famous by its founder Colonel Sanders turned a forest green and white instead.

On this humid August day in Atlanta, customers lined up around the block, waiting for hours to get a taste of vegan chicken done the KFC way—with those secret herbs and spices. It was a hit. The chain sold out in hours, selling the equivalent of a week’s worth of popcorn chicken before the sun went down.

KFC had already been trialing vegan chicken in the UK, hinting at bigger things to come. It partnered with popular vegan burger brand Beyond Meat in the chicken development. It has since toyed with more trials, most recently in Los Angeles at a handful of select locations. It launched vegan chicken in Canada to rave reviews. It even added meatless chicken options to menus in China, a country known for its love of meat.

At the start of 2021, for the popular Veganuary campaign, UK KFC locations re-launched its vegan “Imposter” chicken burger. The burger was trialed in 2019, selling out completely in just four days.

“The Colonel was all about welcoming everyone to his table—now vegans, flexitarians, and our fried chicken fans can all enjoy the taste of our Original Recipe together,” Ira Dubinsky, innovation director at KFC UK and Ireland, said in a statement.

“We’ve worked hard to perfect the flavour and make a Vegan Burger the Colonel would be proud of. It’s the flavour of KFC, just with zero chicken.”

The chicken industry is big business—and in this day and age, that means big problems. More chickens are killed for meat than any other land animal—by a landslide. Of the more than 55 billion land animals raised and slaughtered for food annually, 50 billion of those are chickens.

It wasn’t always that way. Chicken was once one of the higher-priced meat options. Price parity with red meat came as industrial farming lent itself to economies of scale. Smaller birds take up less space. Farmers could, and did quite literally, cram more of them into cages stacked on top of more cages. Stacks of those piled into concentrated animal feeding operations (CAFOs), increasing production and decreasing prices. Now, chicken is one of the cheapest proteins on the planet.

But it’s also the dirtiest.

The poultry industry has scant and loosely defined regulations. Although we raise and slaughter significantly fewer cows than chickens, we protect them more stringently. And while some countries and cities are enacting more protection for chickens, they’re generally not in line with mammal protections.

“Chickens raised for their flesh, called ‘broilers’ by the chicken industry, spend their entire lives in filthy sheds with tens of thousands of other birds, where intense crowding and confinement lead to outbreaks of disease,” PETA (People for the Ethical Treatment of Animals) notes on its website.

According to PETA, they’re bred and drugged to grow so large so quickly “that their legs and organs can’t keep up, making heart attacks, organ failure, and crippling leg deformities common. Many become crippled under their own weight and eventually die because they can’t reach the water nozzles. When they are only 6 or 7 weeks old, they’re crammed into cages and trucked to slaughter.”

The chicken industry is problematic in other ways, too. According to federal data in the U.S., 25 percent of raw chicken is contaminated with salmonella. While not all strains cause severe illness, the increased presence compounds the risk.

While headlines are still dominated by the spread of the coronavirus, avian flu quietly took its toll in the last two years, too. Cases have been on the increase around the world. This has led to the culling of millions of birds in the last year; Japan alone has already slaughtered nearly 6 million chickens.

Antibiotics, which are routinely fed to livestock to prevent disease and speed animals to market weight, also pose major public health risks. We give more antibiotics to animals than to humans. This overuse in our food supply creates antibiotic resistance. According to the World Health Organization, this is moving us toward a “post-antibiotic era” where minor infections can become fatal.

Chicken farmers are seeing the writing on the wall, too. Industry-wide practices like the tournament pricing scheme leave many struggling to survive. Animal rights organization Mercy for Animals is just one group that has begun working with chicken farmers to move them toward vegan commodities instead.

“One of our missions is the idea of transitioning chicken farming into mushroom farming,” Sarno told Vegconomist in 2019.

“Having been in both mass production chicken grow houses (and slaughterhouses) enough and also working closely with mushroom grower facilities, we see a lot of similarities and growing and eating mushrooms is much better for the environment and our health,” Sarno said.

“This is part of the future of food and offers the opportunity to create a closed loop production method that will be much more sustainable than the current.”

There’s already a robust roster of plant-based chicken offerings, including the two biggest names in vegan burgers. Both Beyond Meat and Impossible Foods are now competing for your nuggets as are a host of other brands including Simulate, Daring Foods, Jack & Annie’s, Gardein, and others including VFC—the UK-based brand co-founded by Veganuary’s co-founder Mathew Glover.

While vegan burgers are now so common meat-eaters are gobbling them up at rates higher than vegans are, it’s the chicken industry, according to de Gruyter, that’s in need of major disrupting. Next Level Clucker opened its first vegan chicken restaurant in San Francisco at the beginning of 2021. It now operates more than half-a-dozen locations in cities including Brooklyn and Seattle.

According to de Gruyter, the chain’s expansion plans include 1,000 locations over the next decade. But by then, it’s likely Clucker will be rivaling dozens, if not hundreds, of other fast-food vegan chicken shops.

But it’s not just chicken made from plants that are getting mainstream attention. Cell-based cultured chicken is the first “lab-grown” meat to hit the market. Singapore approved the chicken, made by San Francisco’s Eat Just, for sale more than a year ago.

The chicken is grown from real chicken cells—taken from a feather or other non-invasive cell samples. It’s then grown in a lab setting without the need for raising or slaughtering live animals. The chicken made its restaurant debut at Singapore’s 1880 just before Christmas in 2020.

Eat Just is best known for its vegan egg products. But it promised to be the first to market with lab-grown meat. And it kept its word.

“This historic step, the first-ever commercial sale of cultured meat, moves us closer to a world where the majority of meat we eat will not require tearing down a single forest, displacing a single animal’s habitat or using a single drop of antibiotics,” Josh Tetrick, co-founder and CEO of Eat Just, said in a statement.

“We’re thrilled to partner with 1880 to launch a product that will someday be served on the dinner tables of families living in the suburbs of Birmingham, Alabama, to the skyscrapers of Shanghai.”

Vegan chicken producers may have Impossible Foods and Beyond Meat to thank for destigmatizing vegan meat with meat-eaters. Both have seen widespread acceptance and interest in their popular burgers. It has led to line extensions and lofty goals, like the pursuit of tougher to mimic vegan versions of bacon and steak. Copycat “bleeding” burger products run the gamut now, too. And in Asia, brands like OmniPork are infiltrating a notoriously hard-to-crack market with plant-based versions of pork and Spam.

For vegan entrepreneurs like de Gruyter, though, while chicken may not be the tip of the iceberg, it’s not the full thing, either.

“My vision was never to open up one concept, one unit, and go about my merry way,” de Gruyter told QSR in 2017. “My goal from the beginning was hundreds, if not thousands, to be honest.”

Demand for vegan meat is certainly making that a possibility. Last September, in a blind taste test that included Impossible’s Chicken Nuggets, the company said seven out of ten consumers preferred the vegan nuggets, with the Impossible nuggets scoring higher in every category from flavor to texture to appearance.

“[T]his launch isn’t really about nuggets,” Pat Brown, founder and CEO of Impossible Foods said in a statement in September. “In the battle for the future of food, this is the first time David has categorically bested Goliat It’s about the historic inflection point we’ve reached.

“For the first time, consumers unquestionably prefer meat made from plants instead of meat from an iconic animal,” he said. “In the battle for the future of food, this is the first time David has categorically bested Goliath, but it won’t be the last.”

In the Race to Fix Our Food System, Vegan Chicken Is Poised for Victory