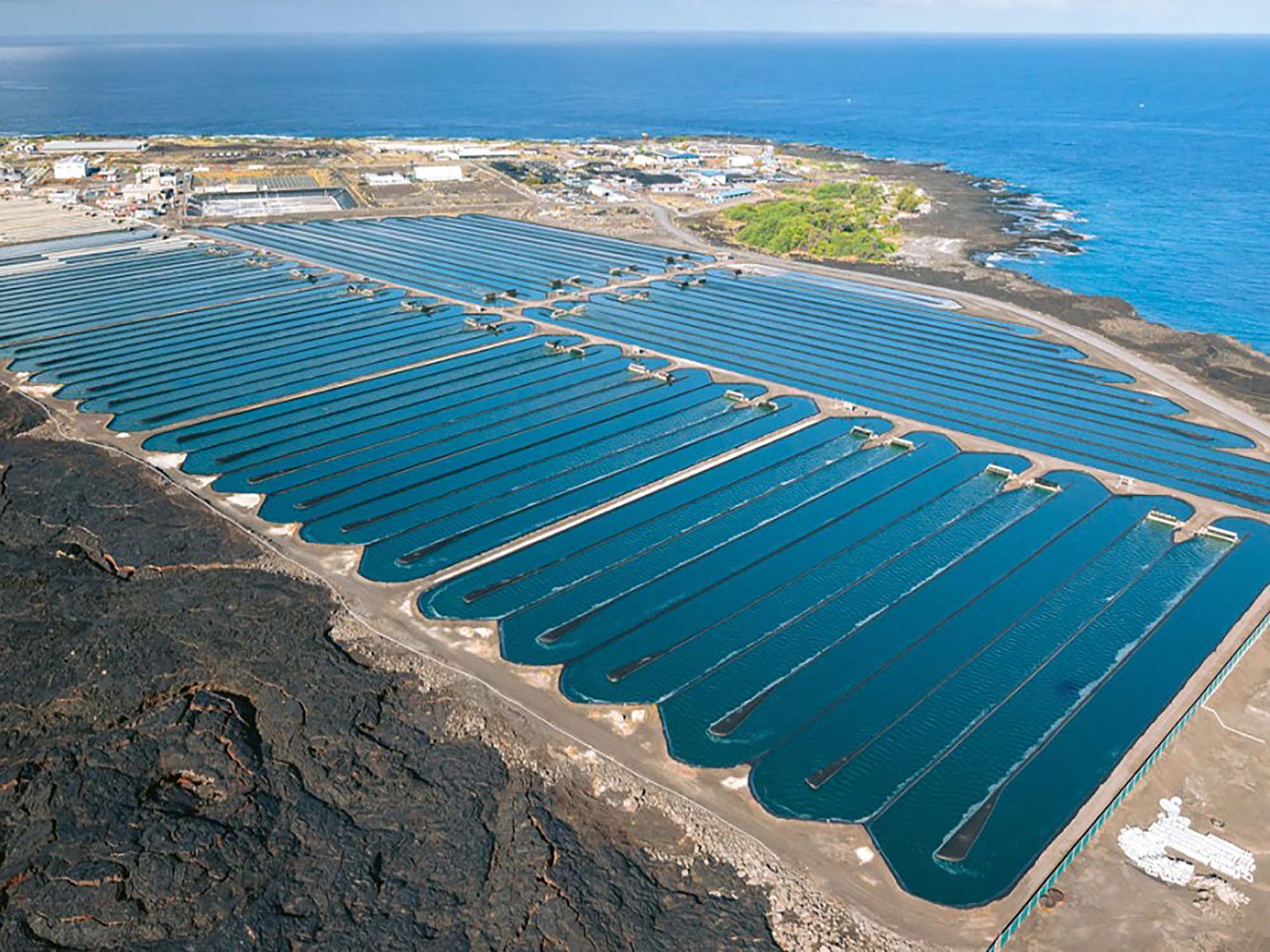 How do we increase food production by more than 50%, on a limited amount of arable land, to feed a projected 10 billion people by 2050?

The solution could come in the form of nutritious and protein-dense microalgae (single-celled), grown in onshore, seawater-fed aquaculture systems.

A paper, Transforming the Future of Marine Aquaculture: A Circular Economy Approach, published in the September issue of Oceanography, describes how growing algae onshore could close a projected gap in society’s future nutritional demands while also improving environmental sustainability.

“We have an opportunity to grow food that is highly nutritious, fast-growing, and we can do it in environments where we’re not competing for other uses,” said Charles Greene, Professor Emeritus of Earth & Atmospheric Sciences and the paper’s senior author. “And because we’re growing it in relatively enclosed and controlled facilities, we don’t have the same kind of environmental impacts.”

Even as the Earth’s population grows in the coming decades, climate change, limited arable land, lack of freshwater and environmental degradation will all constrain the amount of food that can be grown, according to the paper.

“We just can’t meet our goals with the way we currently produce food and our dependence on terrestrial agriculture,” Greene added.

With wild fish stocks already heavily exploited, and with constraints on marine finfish, shellfish, and seaweed aquaculture in the coastal ocean, Greene and colleagues argue for growing algae in onshore aquaculture facilities. GIS-based models, developed by former Cornell graduate student, Celina Scott-Buechler, predict yields based on annual sunlight, topography, and other environmental and logistical factors.  The model results reveal that the best locations for onshore algae farming facilities lie along the coasts of the Global South, including desert environments.

“Algae can actually become the breadbasket for the Global South,” Greene said. “In that narrow strip of land, we can produce more than all the protein that the world will need.”

Along with high protein content, the researchers noted that algae provide nutrients lacking in vegetarian diets, such as essential amino acids and minerals found in meat and omega-3 fatty acids often sourced in fish and seafood.

Algae, which grow 10 times faster than traditional crops, can be produced in a manner that is more efficient than agriculture in its use of nutrients. For example, when farmers add nitrogen and phosphorus fertilizers to grow terrestrial crops, about half runs off fields and pollutes waterways. With algae grown in enclosed facilities, excess nutrients can be captured and reused.

Similarly, carbon dioxide must be added to aquaculture ponds to grow algae. Researchers and companies have been experimenting with adding algae to construction materials and cement, where the carbon gets sequestered and removed from the atmosphere. “If we use algae in these long-lived structural materials, then we have the potential to be carbon negative, and part of the solution to climate change,” Greene said.

One challenge is that sourcing CO2 is currently expensive and energy inefficient, but engineers are experimenting with concentrated solar technologies that use mirrors to focus and concentrate sunlight to heat a working fluid, which in turn can be used in direct air capture technologies that capture carbon dioxide from the air.

Also, while algae farming solves many food-related and environmental problems on paper, it can only be successful if people adopt it in diets and for other uses. Adding nutritious algae as a major ingredient or supplement in plant-based meats, which currently rely on less nutritious pea and soy, is one possibility.

Co-author Xingen Lei, professor of animal science at Cornell, and other colleagues have found that when algae is added to chicken feed, hens lay eggs with triple the amount of omega-3 fatty acids as normal eggs.

A follow-up perspectives piece that highlights and expands on the points of this paper, will appear in the October issue of PLoS Biology. Scott-Buechler, currently a doctoral student at Stanford, is a coauthor on both works.