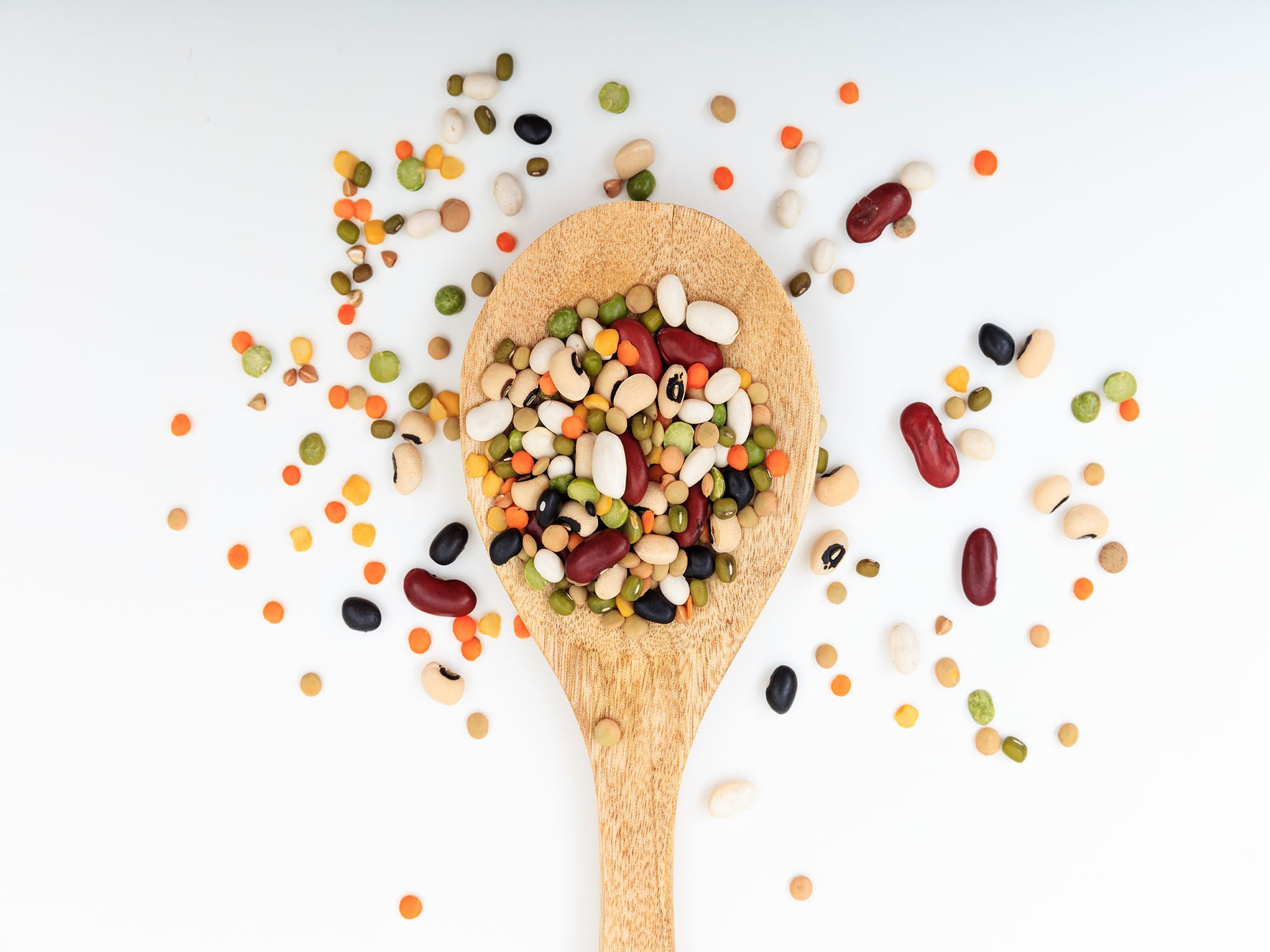 Time to get smart about pulses

ProVeg International is a consortium member of the Smart Protein project, a €10 million EU-funded project under Horizon working to develop plant-based products which are cost-effective, resource-efficient, nutritious and produced in Europe. The project has developed a true farm-to-fork strategy, where 33 partners across 21 countries are working together to develop novel proteins using three proteins sources. These include crops such as quinoa, fava beans, lentils and chickpeas through regenerative organic agriculture; novel ingredients such as yeast and fungi; and byproducts from pasta, bread, and beer production.

ProVeg is part of the consortium leading the communication and dissemination work, as well as contributing to market and consumer research.

As the world’s population grows, there is an increased demand for protein sources and a greater need for more resource-efficient production. The Smart Protein project promotes the growth of crops that are nutritious, have a lower impact on the planet than animal-based foods, are affordable, accessible and have a broad range of culinary applications. Here, Mathilde Alexandre, Senior Project Manager, ProVeg International, talks-up this humble ingredient that will play and increasingly important role in the future of food.

How does growing pulses benefit the environment?

The Smart Protein project focuses on four different crops, including pulses such as fava beans, lentils and chickpeas.

Legumes can naturally nourish the soil and improve fertility. Fava beans are especially promising as they can be grown during both summer and winter. One of the advantages of fava beans is their capability to fix nitrogen from the atmosphere. Among legumes, fava beans are especially good at nitrogen fixation, which allows them to grow in low-nitrate soils and have a reduced need for nitrogen-based fertilizer. This process naturally nourishes the soil since some of the fixed nitrogen is absorbed into the soil and becomes available for adjoining and successive crops. It also improves soil fertility and water-holding capacity and loosens the soil, all of which are essential for a rich harvest.

Lentils are also nitrogen-fixers and have shown to be high yield when grown in crop-rotation with oats. Nitrogen fixation is also responsible for the high protein content of legumes, since nitrogen is an essential part of the amino acids that form protein.

The Smart Protein project has made the growing of protein crops (chickpeas, fava beans, lentils, and quinoa) using regenerative organic agriculture (ROA) principles a key focus of its work. ROA moves beyond sustainable agriculture and is based on the principles of regenerating soil health to more fully sustain life and local ecosystems.

Although all four of the Smart Protein crops show high potential for cultivation in Europe, there are still some unknowns that need to be investigated further to increase yields and make crop production more efficient and therefore attractive to farmers.

Besides being well suited for European soil, some of the four crops have exciting additional technological benefits that make them the perfect fit for developing delicious and nutritious plant-based alternatives. A high-protein lentil milk has already been developed by the PROTEIN2FOOD project, scoring just as high as other milk alternatives in sensory tests, with about the same protein content as cow’s milk. Lentil protein isolate has also been used in a new infant formula that meets EU requirements and could potentially replace soya formula, while fava beans were found to be a great addition for protein-rich bread and pasta.

Chickpeas are already well known for their use in falafel, hummus, and curries. Besides holding their own in the kitchen, chickpeas impress with drought resistance and protein functionality. However, they are mainly used as whole beans. One of the goals of the Smart Protein project is to explore the possibilities of isolating chickpea protein and using this in delicious, high-protein plant-based meat alternatives.

Despite their status as orphan crops, legumes show high potential for growing in Europe as the climate changes. In fact, even under present climatic conditions, production of these nutrition crops could be far higher.

Processing has a major impact on the characteristics of the final raw ingredients. Ultrafiltration, for example, results in a significantly higher protein content, with a higher protein solubility. Furthermore, lentil protein isolates generated using this method have superior characteristics in terms of fat- and water-binding capacity, gelling properties, and foam-formation capacity. Compared to traditional dairy proteins, lentil-protein isolate shows promising properties, a low carbon footprint, and can be used to replace eggs in baked goods such as donuts and muffins or function as an emulsifier in salad dressings. When used as flour, lentils are involved in the production of gluten-free crackers. In addition, a recent publication from Jeske et al. (2019) showed the high potential for lentil protein isolates in the production of milk substitutes. The formulation and characterisation of a lentil-based milk substitute was revealed, using different homogenization and pasteurization approaches. The resulting ‘lentil milk’ contained a protein content of 3.3% (w/w), fat content similar to commercial cow’s milk, and sensory attributes comparable to other plant-based milks such as soya. Through high-pressure homogenization, solubilization and surface hydrophobicity was increased, while the free sulfhydryl groups decreased. Furthermore, treatment with high temperatures resulted in a whiter color of the final product. This is great news and means that there will be even more lentil-based foods available soon, thanks to the Smart Protein project.

In what ways do pulses contribute to food security? ‍

According to Gemini Delle Vedove, Senior Researcher in Agronomy and Lecturer in Organic Farming at the University of Udine and Smart Protein Work Package leader on Crop Production, grain legumes have a great potential to foster food security as they are less fertilizer and demanding of water, more flexible in cropping season, local consumption and for processed products. Moreover, N Fertilizer use is not necessary due to biological fixation of N of pulses, and crop’s demand for P and K macronutrients is low. As legumes, these crops support a rich soil biodiversity (e.g. mycorrhiza). Less fertilizer means less energy and so less dependency from fossil energy supply and lower production costs.

Pulses, known also as 'cool season starch-protein crops', consume less water as they produce less biomass compared to other crops. Moreover some of them (such as chickpea and to a lesser extent lentil), are more resistant to drought than other common cereal crops. Having more reliable seasonal weather forecasts, it would be possible to adapt sowing time year by year to fit the crops requirements with climatic conditions. For South Europe, winter or early spring sowing is a way to escape summer drought for all Faba Lentil and Chickpea crops.

The environmental impact of mass meat production is clear. Pulses obviously provide a solution as an alternative meat source. How have you witnessed the rise of alternative proteins in plant-based foods/meat-free meats, and pulses as an ingredient within them?

Plant-based consumption is growing at record levels across Europe. The Smart Protein project compiled a report analysing Nielsen retail scanning data from 11 European countries between October 2017 to September 2020, representing the biggest and most accurate overview of plant-based consumer habits in Europe to date. Every country in the survey has reported an increase in its plant-based consumption, with a staggering 49% growth across Europe, reaching a total sales value of €3.6 billion in 2020. The German plant-based meat sector has grown by 226%, reaching a total sales value of €181 million in 2020 (only vegan meat included).

A pan-European survey, by ProVeg International in partnership with Innova Market Insights, the University of Copenhagen, and Ghent University as part of the Smart Protein project, has indicated that there is a significant shift towards plant-based eating taking place across the continent. The survey asked more than 7,500 people in 10 European countries about their attitudes toward the consumption of plant-based foods. The findings show a fundamental shift in consumer behaviour towards more sustainable, healthier and ethical food products. Almost half of those sampled (46%) stated that they have already reduced their meat consumption significantly. Around 40% of European consumers intend to consume less meat in the near future. Around 30% of consumers stated that they intend to reduce their dairy consumption. And 73% of flexitarians had substantially reduced their meat consumption. Almost 30% of Europeans said that they plan to consume substantially more plant-based dairy and meat products.

Pulses have been largely neglected by policy-makers and public investors, despite their obvious vital role in the future food supply system. Why do you think this is and what would you do if you were in charge?

Legumes are usually produced in Asia, Africa, and North and South America, and imported to Europe. In the West, legumes are considered ‘orphan crops', meaning that they are underdeveloped and under researched and therefore not cultivated according to modern agricultural methods. As such, yields are below their potential – which is something that the Smart Protein project wants to change.

While crop diversification is important to sustainable agriculture, over the past 60 years, Europe has moved in the opposite direction, favoring just a few cereals (maize, wheat, and barley) and oilseeds (canola and sunflower). A significant reduction in the area cropped with grain legumes (pulses for food, in particular) has been observed, leading to a reduction of the ecosystem services provided by legumes.

The acreage of protein crops such as peas and faba beans was considerable in the early 1990s of the last century, and collapsed again as prices went down or subsidies were banned. Farmers crop cereals because the industry prefers cheap grain legumes (for feed or for food) from elsewhere.

The simplification and specialization of agricultural production systems over time has led to a general decrease in diversity. As a result, agricultural landscapes are becoming more homogenous, and wheat and other cereals reign supreme in Europe. “t seems that farmers are locked into the current food-supply chain, since most research, genetic improvements, and farmer consultancy system is based on major cereal or bio-energy crops. Farmers’ lock-in is also caused by high specialization downstream of the supply chain: cereal selection and storage plants are generally not able to manage grain legumes or other crops for human consumption (e.g. buckwheat, millet, quinoa, amaranth). The majority of storage and processing facilities are designed for cereals or oilseed crops for biofuel (e.g. rapeseed or sunflower).

This is why the Smart Protein aims to explore the crop suitability and processing quality of quinoa, faba beans, lentils, and chickpeas in seven representative pedo-climatic zones of Europe, using organic regenerative farming systems.

Time to get smart about pulses